The project is realised in three parts, based on the questions: How do we create ourselves, who makes the prototype? How does resemblance appear in differences and vice versa? How does the personal appear on the border between cultures, nations, between you and me?

PROTOTYP I:
I am I and hope to become so even more
took place in Malmö, Aug. -96 at a hairdresser«s. I invited six women, who were, together with me, cut and coloured in the same hairstyle, red page. We did some things together, like for example having a cray-fish party.

PROTOTYP II:
destroying the original
took place as a performance at the Spider-Mouse Gallery in Moscow, Oct.-96. I invited five Russian women and two hairdressers to the gallery. I was the Prototype, the model for the five women, who were cut and coloured in the same hairstyle as mine, red page. When the copies were completed, I had my hair shaved off – to destroy the original.

PROTOTYPE III:
the Tribe
was a presentation of the whole process. Since I was out of the game I invited one of the Russian women, six Norrtälje-women and a local hairdresser to the Art Gallery. On the opening-day of the exhibition, the Norrtälje-women were cut and coloured in the same way as the Russian woman, red page.

The PROTOTYP-project will be continued by the participating women, who are supposed to go anywhere in the world to be the model for new Prototypes. Little islands of red-headed women will appear all over the world and the earth will from the outside come to look like an inverted lady-bug. 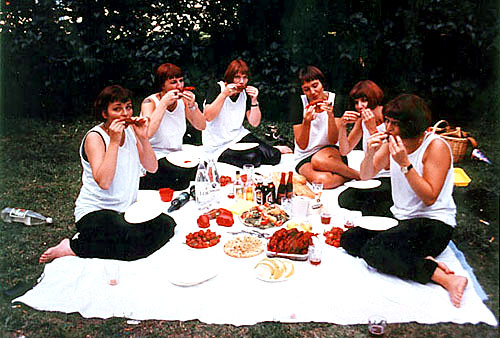 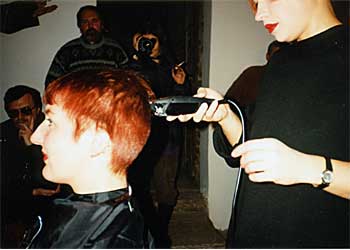 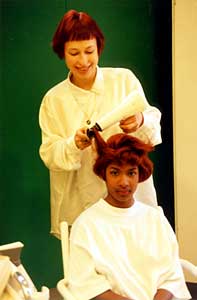